In their recent report “Fintech and the evolving landscape”,  Global consulting company Accenture stated that Asia Pacific (APAC) region had a quadrupled growth in 2015 with to USD 4.3 billion. With this figure. APAC contributed almost 20% of total investment in global fintech industry (USD 22 Bio) and become the second biggest invested fintech region after North America. Most of these growths are contributed by China and India while in South East Asia, the hottest fintech hub still being lead by Singapore. 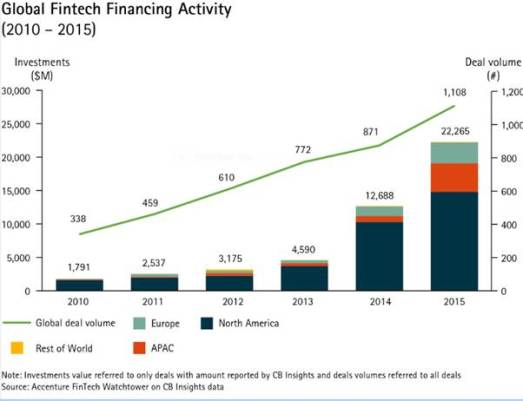 In terms of business model, payment still reigns in a top spot for the most invested fintech business in APAC. However there is a huge surge in Insurance technology. From 2014 to 2015, Insurance Technology grow almost tripled even though the amount is still small compared to payment.  The report predicted that Insurance Technology will be the next hot battleground in APAC fintech landscape.

This is a good sign that going forward banks and other financial are more open to invest and collaborate with fintech startups. Trend which we already see in Indonesia right now with BCA and Mandiri leading the pack.

Global mammoth on online payment, PayPal has just launched fintech incubation program in Singapore. This program are opened for fintech startups in the region. Selected participant will go through nine month incubation in PayPal’s Technology Centre in Suntec City. The incubation program will include mentorship on finance and technology topics such as risk, compliance, core payment network and channel development. Participant will also given direct access to PayPal executives, external talents and also well-known industry experts.

In order to be eligible, applicants should fulfill these criteria :

1. A fintech or technology startup
2. Have a minimum viable product (MVP) and early trial with customers
3. Armed with seed stage funding
4. Based out of Singapore or willing to relocate to Singapore

Acceptance will be judged based on team capability, business model, technology innovation and traction.

Apart from PayPal, VISA also setup strong footprint in South East Asia by opening their new Innovation Centre which also in Singapore. Align with the Accenture report, massive growth in fintech sector has been jump-starting the interest of global tech giants  to setup business in this region.

More information on this here (e27)

In a surprising twist, recently Gojek has striked partnership with the Bluebird, the company they aimed to disrupt. During the press release, Head of Buebird Public Relation Teguh Wijayanto stated that this partnership improve hailing process for Bluebird. Gojek’s CEO Nadiem Makariem also said that the partnership will include technology, payment system and promotion. Currently the detail on this partnership is not yet clear. Both parties has stated that Gojek-Bluebird joint services will be revealed to public at the end of May 2015

Focusing specifically in payment parts, this partnership will likely served as the first Go-Pay payment expansion outside Gojek own ecosystem. Considering this move and their recent GoPay campaign (50% discount  for all gojek services), Seems like Nadiem Makariem has a big ambition to dominant players in the universal payment platform going forward.

More information on this here (Kompas).

As part of my job as Innovation Management, on a weekly basis I deliver quick industry updates to the relevant XL Digital services team. Since i will be writing this for work, might as well post it here. Hope you guys find it useful.

For this competition, BCA invited several experts in Indonesia startup ecosystem to be the judges. Amongst them are Andrew Darwis (Kaskus), Anton Soehartyo (Touchten), Rama Mamuaya (DailySocial) and several others.

Three winners were announced at the end of this events.

This initiatives can be seen as increasing commitment from Bank BCA to dive in into Indonesia digital ecosystem going forward.  No news yet on whether their Data API will be accessible for public or not. Considering the massive size of BCA, it will spark a whole lot new services if their API opened for developers and startups.

More information on this : https://dailysocial.id/post/inilah-3-aplikasi-pemenang-finhacks-2016-hackbythebeach/

Apart from BCA, Bank Mandiri also had started a move to venture in Indonesia startup ecosystem. Earlier this year, this biggest bank in Indonesia launched their venture capital subsidiaries called Mandiri Capital Indonesia (MCI). For this venture, the corporation has set up IDR 500 bio funds to be invested in several potential startups.

On top of financial investment, MCI will give mentorship guidance to their portfolio startups and also give marketing platform to connect the startups with potential customers / partners (e.g using Wirausaha Mandiri platform)

Budi Gunadi Sadikin, Bank Mandiri CEO, explained that the company sees the emerging trend of disruptive technologies following the growth of Indonesia digital ecosystem. For example, Ride-hailing apps and various e-commerce players have changed the way Indonesians do business. Bank Mandiri cannot afford to be left behind in this movement hence the decision to jump in directly into Indonesian startup ecosystem.

“Financial technology startups are in this money moving business. That’s why we (Bank Mandiri) entered this space with a focus on fintech,” Budi stated.

Mandiri Capital Indonesia will be focusing to invest in fintech and e-commerce digital payment space to leverage on existing Bank Mandiri’s business. Currently, the bank had more than 2 million merchants which mostly receive payments in cash.

Going forward, theres a big possibility for Gojek to utilize GoPay for universal cashless payment platform apart for their own services.

More information on this : https://id.techinasia.com/gojek-hadirkan-gocar-saingi-uber-dan-grabcar