Several weekends ago me and fiancee tried a Korean food joint called Mujigae. In that restaurant, while eating you will be blasted by non-stop Korean music video clips. I spent like an hour and half in the resto so that maybe like 30 ish songs. I realized that all of the songs ive heard sounds pretty much the same. Just like the facial features of Girls Generation’s member, i cannot recognized the difference from one to the other. Its all boys or girlsband dancing synchronously , singing pop vocals over dance beats. Superficial and manufactured. 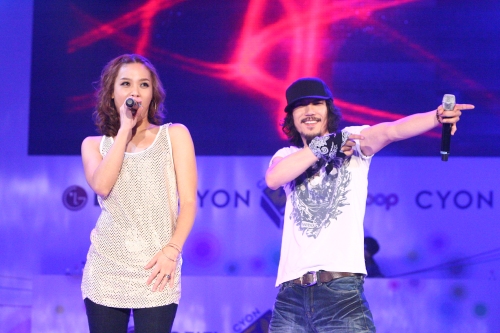 As a staunch believer in music pluralist, I believe theres always good music in every genre. Case in point : Have you heard about Hindi Progressive Rock.  Just for the sake of it, i started digging Korean music in Youtube in hope to find quality and non-formulaic Korean music. I found one in peculiar place which is in the most controversial movie this year, The Interview. The movie was in yet another controversy due to unlicensed use of one of the song, Pay Day by Yoon Mi Rae.

Well, i kinda glad that happened because i would never know Yoon Mi Rae . If you havent heard about her as well, youre in for a treat.

Yoon Mi Rae a.k.a Tasha is a half African American and half korean. She is regarded as the queen of korean hiphop. In Black Happiness video above, she rapped about being bullied because of her mixed identities. Man, thats a real gangsta conscious rap shit. Her husband, Tiger Jk is also hip hop musician. Together they formed hip hop collective My Fans are Better Than Yours (MFBTY) which sounds more EDM-ish. I prefer her old solo works which is more boombap style hiphop but some of the new song such as Sweet Dream is quite catchy.

Being a little bit open mind, i found my Korean music jam thats not fake and boring. Man, i love good music.

2 thoughts on “Not Your Usual Korean Music”